It started when his Uncle Kevin gave him an action figure from the old Mighty Ducks cartoon series.

Jake Leamer, then 4 years old, never thought much about hockey before that day.

Soon he was wearing plastic roller blades, gliding through the house and down the driveway with a stick in his hands.

Today, 15 years after receiving that inspirational gift, the Brandywine Heights graduate is a defenseman for the Walpole Express of the Eastern Hockey League. He's working toward becoming a college recruit.

"I can't imagine my life without hockey," he said. "It's just something I can't see."

He never imagined his favorite sport might one day save his life.

He was playing for the Central Penn Panthers, killing off a routine penalty, when he was checked from behind.

"It was actually a fairly innocuous hit," said Andy Scott, Leamer's coach at Central Penn at the time. "He just caught Jake in an awkward position near the boards. He had all his feeling when he left the ice. We were pretty sure he was going to be OK."

There was an immediate burning sensation in Leamer's neck, and he was kept on the ice for about 45 minutes until he could be immobilized and taken to a hospital.

There were fears of a head or neck injury, so a CT scan was ordered to rule out every possibility.

The scan revealed something unexpected.

"It came back, and they said, 'Everything is fine with your head, but we saw nodules in your neck that looked oversized,' " Leamer said.

The doctor said this discovery likely was nothing to worry about, but it should be monitored.

Leamer sat out a week with a concussion before returning to the Panthers. The frightening feeling that came with that moment quickly disappeared, and life went back to normal.

He followed up with an endocrinologist in November and again in February, just as he was told. Again, there seemed to be no cause for alarm.

The last step was to have an ultrasound of the thyroid and blood work done.

Leamer put off those tests for a few months. It was the heart of recruiting season for juniors, and he was trying to land a spot with Walpole.

When he had a physical in May to check out shoulder and hip injuries, he finally had the blood work completed. That's when he learned he had thyroid cancer.

"It's something I can't even explain," Leamer said. "It was a shock to the system. It's something I never thought would happen to me. It was scary. You don't know what's going to happen with it."

Leamer had surgery shortly before Memorial Day, seven months after the terrifying hit and two months before he was supposed to leave for Walpole, Mass., to start the next phase of his career.

He was afraid hockey might be taken away from him.

Every day at 4 a.m. Leamer's alarm clock rudely interrupts him. He wakes up before dawn in order to take Synthroid, a medication designed to regulate his hormones like his thyroid gland should.

After he swallows the pill, he rolls over and goes back to sleep. He has to wait an hour after taking his medicine before he can eat, so he makes sure to take it early. He doesn't want it interfering with his workouts.

Other than some adjustments to the Synthroid to regulate his energy levels, his post-surgery life is normal. He said he plays with the same energy, and perhaps more intensity, than he did before his illness was diagnosed.

Leamer never needed chemotherapy or radiation treatment. Following his surgery, he took an iodine pill designed to kill any residual cancer tissue. That was the end of it.

He considers himself lucky.

If not for that hit and the subsequent scan, Leamer never would have known about the enlarged nodules. He would have walked through life with no idea a potentially fatal disease was growing inside him.

Thyroid cancer is treatable if detected early. The problem is it often doesn't exhibit symptoms until it's too late.

If they didn't find the nodules, Leamer likely would have started experiencing swollen glands or trouble swallowing when he reached his mid-20s. By then the disease may have reached his lymph nodes.

"It was a miracle," he said of the early diagnosis.

The initial reaction of Leamer and his family after that head-first trip into the boards was rage. They thought it was a dirty play, an unnecessary hit that put a player in danger.

Their feelings have changed in the ensuing 15 months.

"We were so angry at that kid," said Keith Leamer, Jake's dad. "It definitely was a cheap shot. It didn't need to be done. Now we want to find this kid and give him a big hug."

Leamer moved to Walpole over the summer. Being a six-hour car ride from home added another layer of anxiety to his cancer fight.

It was a necessary commitment. His goal is to play in college and exposure in the high levels of juniors is the best path.

Playing hockey has been a driving force in his recovery.

"I have to do as much as I can to get it out of my head," Leamer said. "I have to forget about it and move on toward my goal of getting better. That's what helped me through it, the sport and my teammates surrounding me."

Leamer, a 6-0, 175-pound, hard-nosed defenseman with a good shot, has played 26 games for Walpole. He'll likely play two seasons for that team while he hopes to attract a scholarship offer.

"He's a very motivated kid," Scott said. "Once you get to that level, that's what really separates the players who make it to college and the ones who fall out of the game. It takes a lot of sacrifice. He's a kid who has been willing to do that."

When he was at training camp with Walpole, teammates noticed the three-inch horizontal scar on Leamer's neck and asked what happened.

They were stunned to learn the story behind it. Only those closest to Leamer knew about his cancer treatment.

The scar has faded through time and is hardly noticeable now.

Leamer's prognosis for a full recovery is excellent. He'll need to have blood work done every six months for five years. If there are no signs of a recurrence during that time, doctors believe he's in the clear.

Despite all he has been through, Leamer knows that good fortune has smiled on him.

"It was a shock to the system," he said. "It's nothing I ever thought would happen to me. Thank God, it wasn't as severe as it could have been."

Leamer still has those action figures his uncle gave him. They are remnants from his childhood, when he watched the cartoon and the movies repeatedly and learned to love hockey.

Every morning his dad, a longtime football coach, sends a text: "Ducks Fly Together!"

It's a phrase from the movie, and it's designed to help Jake remember to play with youthful enthusiasm.

He probably doesn't need the reminder. He's grateful he gets to play at all. 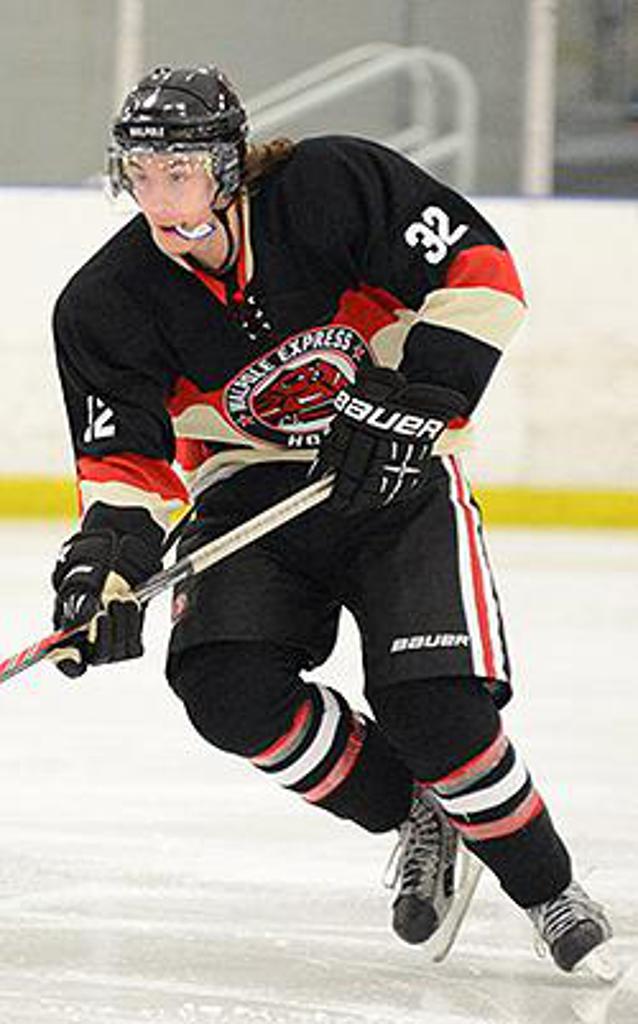