Walpole, MA  - The Express departed Rodman Arena at 4:00am Friday morning for a three-day road trip to Canada where they would take on the HTI Stars and the OHA Mavericks Juniors.

The series kicked off Friday at 5:30pm vs the HTI Stars. The last time the Express faced HTI was at the Buffalo Inferno Tournament where they fell 7-2. “The girls could not wait to hit the ice; they were fired up to get some revenge,” said Coach Danielle Doherty.

Cassidy McNeeley got the Express on the board late in the first period with a goal that ended up being the game winner. Elizabeth Furfari chipped the puck up to McNeeley who was flying through the neutral zone. McNeeley took three hard steps inside the blue line, cut inside, then cut outside and fired a shot low blocker. Cassi Ronan lifted the Express lead to two in the second period when Ally Jurman found Ronan back door. Kiki Doucette ended the scoring for the Express when came down on a 2 on 1 with Sam Molind, who slid the puck over to Kiki to blast a one-timer to the back of the net for the 3-0 lead. Lily O’Neil grabbed the shutout win with her outstanding play.

“What a great team win for my girls. Being on a bus for 10 hours and having to play a game the same day against a very good team is not easy to do, but yet my girls came out flying, hungry for the win,” said Coach Danielle.

The Express a had quick turn around the next morning for their second game against HTI, falling by a score of 4-0. HTI forward Natalie Mlynkova scored three times and assisted on one of their goals for a four-point game. “I was very happy with the split against HTI. They are a very strong, skilled team so to travel 10 hours and get two points is huge,” said Coach Danielle.

After the second HTI game, the team packed the bus and headed to Cornwall, ON for their two-game series against the OHA Mavericks Juniors. Their first game against the Mavericks was at 7:30pm. Alyssa Murphy started the scoring in the first period, which would serve as the the game winning goal when Cassidy McNeeley and Hannah Murphy made a tick-tack-toe play for a shot on net, leading to Alyssa burring the rebound. Later, during a scrum in front of net, the puck popped out in the slot and Sarah Zedian came in and rifled the puck bar down, but the puck failed to cross the line. Hannah Murphy collected the puck firing it on net, where it deflected off Maddie Scheinberg to give the Express a 2-0 lead.

Coach Danielle was proud of her goaltender. “Lily O’Neil stood on her head the entire game but was amazing in the third.” Lily O’Neil received her second shutout of the weekend. “Another great win for my girls. After our morning game against HTI we had to get on the bus for a six-hour bus ride to OHA for our third game of the weekend and second of the day. Playing two games in one day is hard enough, never mind driving six hours prior to it. The girls really dug deep and worked together to get the win,” said Coach Danielle.

Coach Doherty was unhappy with th team's second period performance saying, “The second period was our worst period of the weekend. A lot of selfish play led to OHA scoring two.” After regrouping during the intermission, the Express came out flying in the third and scored right away. Cassidy McNeely passed it up to Sami Barletta who ripped a slap shot from the blue line. The rebound came out to Kiki Doucette who buried the puck far side for the Express’ 4th goal. OHA would then score their third of the game to cut the lead back to one, but Alyssa Murphy would get her second of the game on an ensuing power play by dangling through three OHA players and ripping the puck top shelf to make it 5-3. Cassi Ronan finished the game off with the empty net goal to give the Express a 6-3 win.

“I could not be more proud of my team this weekend. Every single player played very well,” said Coach Danielle.

The Express are back at it this weekend against the East Coast Wizards and Northern Cyclones. “The girls are playing their best hockey right now. I could not be more confident about this weekend,” concluded Coach Danielle. 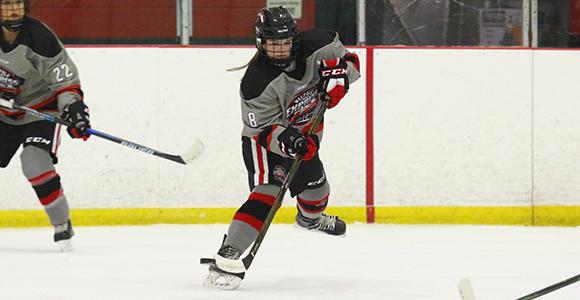