Express EWHC Take 3 of 4 Points on the Weekend

Walpole, MA  - The Express faced-off against local rivals the East Coast Wizards and Northern Cyclones this past weekend, coming away with points in both games. The Express took on the Wizards Saturday night, defeating them by a score of 1-0. Kiki Doucette picked up the lone goal for the Express, with assists from Maddie Scheinberg and Hannah Murphy. Lily O’Neil recorded another shutout. “Not our best game but good teams always find a way to win,” said Coach Doherty.

The Express would take on the Northern Cyclones the following day on home ice at Rodman Arena. The Express would be the first to get on the board with a power play slapshot goal from Captain Sami Barletta as she ripped it past the goaltender from the point. Barletta’s D partner, Cassi Ronan, had the assist on the goal. The Cyclones went on to score two goals in the second period to take the lead. With 45 seconds left in the third period, Cassidy McNeeley fired a shot on net from center ice on the penalty kill that bounced behind the Cyclones goaltender’s shoulder and crossed the goalline, ending regulation in a tie. The teams went to a 4 on 4 overtime but with neither team finding the back of the net, the game ended at 2-2.

“The three points were huge for us. I’m glad we were able to keep the Wizards off the board to grab a 1-0 win. And then to comeback against the Cyclones to get a point was clutch,” said Coach Doherty.

The Express are back in action this Saturday afternoon in Marlboro, MA. 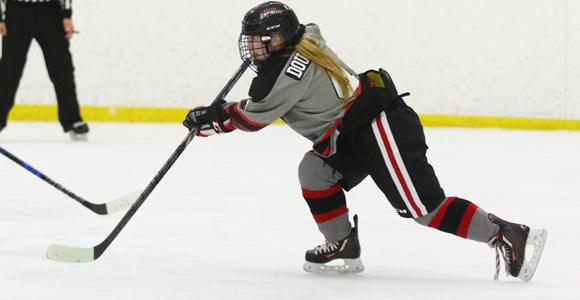