Express EHL Sweep Round One

Walpole, MA  - This past weekend the EHL team was able to sweep the New England Wolves to advance to round two of the EHL playoffs.

In game one the Express traveled to Laconia, NH to face off against a physical and determined Wolves club.   After a few minutes of back and forth hockey the Express were able to strike on the powerplay when Charlie Page (Winthrop, MA) took a cross ice feed from Chris Peters (Rochester, NY). The Express would never look back as they were able to score seven more times en route to an 8-2 victory on the road. Austin Smith (Orland Park, IL) was steady in net as he stopped 18 of 20 shots faced in the game.

"I thought we played a good enough team game to win, but I was very impressed with our special teams as we capitalized on five of our eight opportunities," said Lounsbury.

In game two the Express came back to Rodman Arena to close out the series in thrilling fashion. The Wolves played desperate hockey and were able to come back from a two goal deficit in the third period to tie the game at three a piece with under four minutes to play. Series MVP Charlie Page again came up big after blocking a shot with 55 seconds remaining. Page was able to break free and beat the defender wide for a net drive goal with 45 seconds remaining to seal the victory and the series for the Express. Austin Smith would pick up his second win of the playoffs stopping 29 of 32 shots faced.

"It was a good win for us," said Coach Lounsbury.  "It's playoff hockey. What happened in games before never matters. That team came out with their season on the line and they played with their hearts. Our team was on our heals at times and it was a good learning experience for us moving forward. Good teams will find a way to win no matter what."

The Express will prepare all week as they face off against the Boston Division champion Boston Jr Rangers for a three game series starting Friday March 16th. 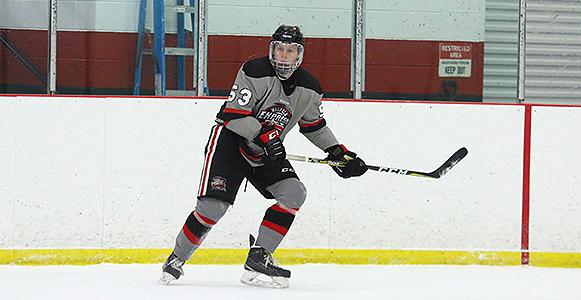