Walpole, MA  - The most recent group of Express Alums are enjoying early success in their first season of NCAA Hockey.  "It's exciting to see all the hard work pay off. I can't wait until they really get settled in to see what they can do," said Coach Lounsbury.

Chris Peters | EHL All-Time Leading Scorer | Freshman | UMass Boston
In Peters first and only game this season for the Beacons he notched his first collegiate goal (game winner) and added two assists on the power play for three points on opening night. "The coaching staff at Walpole did a great job preparing me for college hockey.  They taught me to compete in practice and helped me develop physically off the ice. I'm grateful for the experience," said Peters.

Will Ahearn | Freshman |  Worcester State
Ahearn, who played a big part for the Express last season, notched his first goal as a Lancer on the power play against Plymouth State this past Tuesday night. "Playing for the Walpole Express for two years really helped me prepare myself for college hockey.  It gave me the extra push to be the player I could be.  I wouldn't be where I am today without the help of Coach Lounsbury and the Express,"  said Ahearn.

Henry Bruckner | Freshman | Worcester State
Bruckner, an elite skater, has taken advantage of his development as he notched his first goal from the blueline on Tuesday night along with Will Ahearn against Plymouth State. "Playing for the Express helped me prepare so much for college hockey. It not only helped me prepare for the speed and skill of the game, it helped me prepare for the mental hurdles as well. Between Coach Lounsbury's position specific work and practices, I am more than prepared to compete this season," said Bruckner.

Bryan Colburn | Freshman | Johnson and Wales
Colburn helped Johnson and Wales to a 3-3 tie the other night with an assist on the tying goal. Bryan is seeing time on the power play as a true freshman. "Playing hockey for Coach Lounsbury allowed me to gain confidence to play college hockey and also prepared me to excel as a student athlete," said Colburn.

Ryan Edgar | Freshman | Buffalo State
Alongside former Express Coach Cos Polino, Edgar was able to notch a goal in Buffalo States opening game, which also gave Coach Polino his first win as a college hockey coach.  "I couldn't of been happier with my experience with the Express. I learned a lot as a player and it prepared me for whatever the staff throws at me here at Buffalo State," said Edgar. 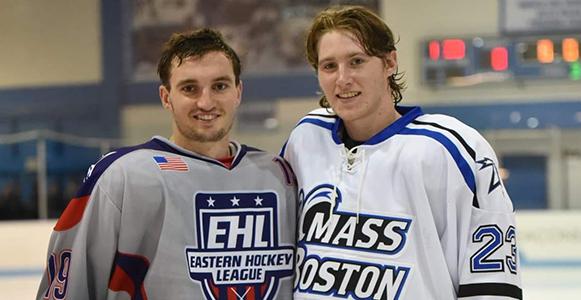