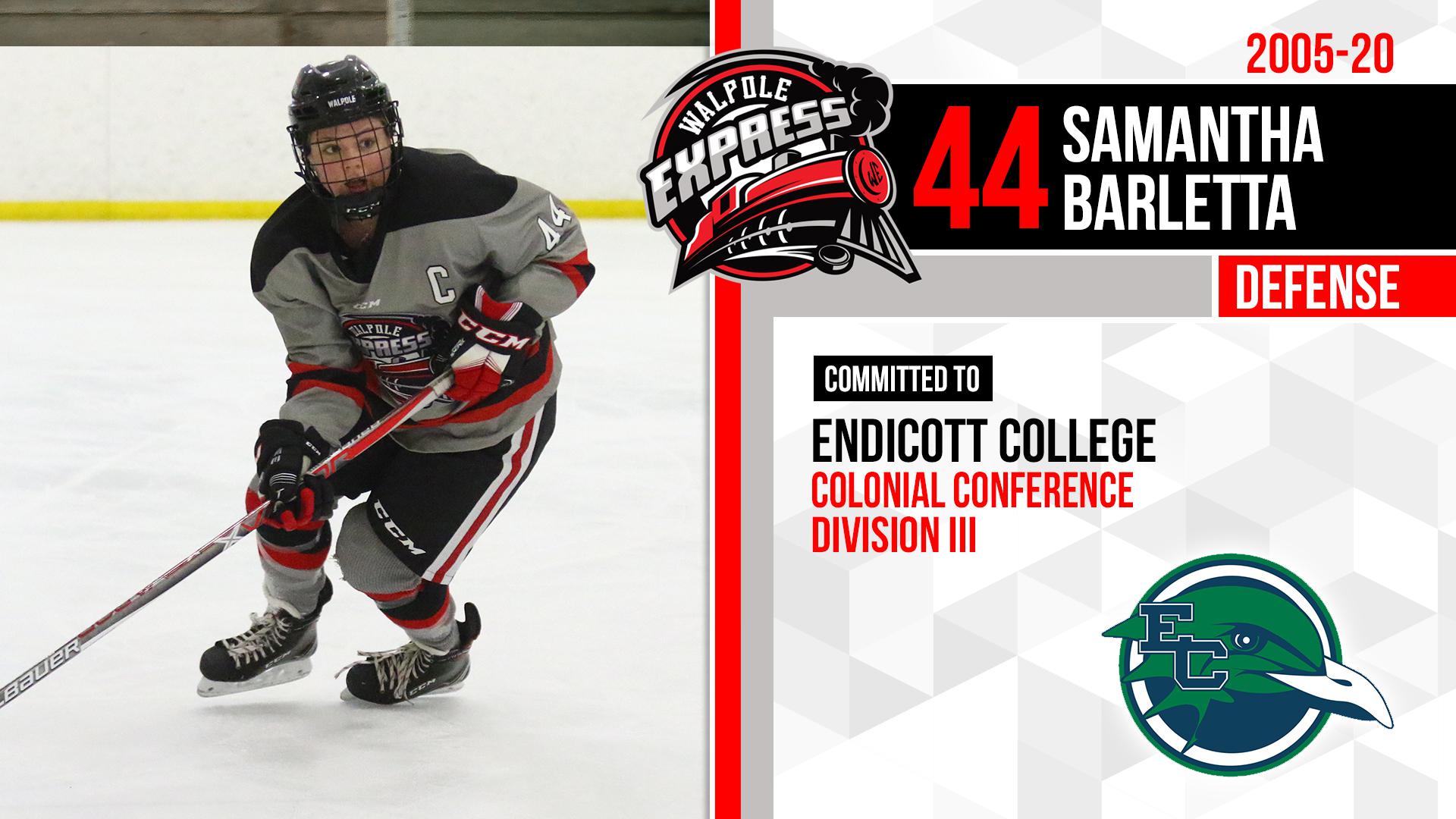 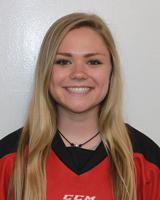 Barletta is currently serving as Captain for the Tabor Academy girls hockey team, and has grown up as a member of the Walpole Express, having started with the program in 2005.

“I am beyond excited for this opportunity to continue my academic and hockey career at Endicott College!” said Sami. “Playing for the Walpole Express has really helped shape the player I am today, and I could not be more thankful for everything it has given me.”

“I would not only like to thank the Express, but my Tabor coaches, friends, family, and especially my dad,” added Sami. “For the past 15 years, my dad has been my mentor and coach; if it wasn’t for the countless hours spent in the rink and for always believing in me, I wouldn’t be in this position.” 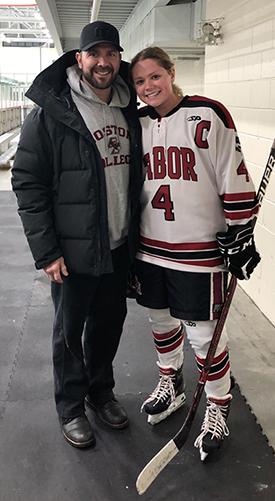 ‘Dad’ is Express owner and proud Father Rob Barletta, who has been along for the ride since she was three years old. “Sami has played on eight different teams for me and never ceases to amaze me with her work ethic and leadership. She was always the first on the ice and the last one to leave,” said Rob.

Rob continued, “As her coach I could not ask anything more from her, but more importantly, as her dad I could not be any more proud of her. As I always told her, the sky is the limit with hard work.”

In addition to being a great player, she is also a terrific teammate. As a 14 year old Sami skated with the Express Woman’s Junior U19 team. By the time she was 16 she was appointed Captain by her teammates.

Boston College Alum and Leprechauns Hockey Director Danielle Doherty coached Sami during those years with the Walpole Express Junior team. “When I took over the team in 2015, I remember meeting Sami for the first time and thinking, ‘Wow, what an amazing kid’, said Doherty. “There was something special about her.”

“Every time she stepped on the ice she improved because of how hard she worked and how eager she was to learn,” said Doherty. “She was always asking questions and wanting to stay on the ice to work on her skills. In every situation, she strives to be the best that she can be. She is the type of kid every coach dreams to have on their team.”

That dedication has paid off. Current Express Head Coach and National Women's Hockey League standout Kate Leary was fortunate enough to have Sami lace up for the team a few times this season.

“She is a great two-way player. Her versatility allows her to be able to play forward or defense and do it well,” said Leary.

Sami had an unbelievable 2017-18 season and it put her in a great situation to attend Tabor Academy, one of the best prep schools in New England, where she is one of their top defenseman.

“I was so fortunate to have her attend Trax Academy at the rink last year and be with her every day. The following year she transferred to Tabor, and in her second season was appointed Captain,” said Rob Barletta.” 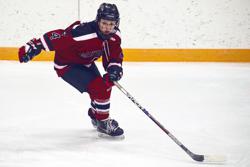 Sami has become a proven leader on and off the ice, and got a chance to join Leprechauns Hockey Director Danielle Doherty behind the bench over the summer.

“Last summer, she joined me as my assistant Coach for the Leprechauns and never ceased to amaze me,” said Doherty. “She has such a love for the game, and it was incredible to see her share that with the players. Sami’s time on the bench and teaching the game has certainly contributed to making her an even better player.”

Sami is ready to get her collegiate career rolling, “I am very eager for what the future holds and cannot wait to get started! Go Gulls!”

Good luck Sami! Everyone at the Walpole Express are incredibly proud of you.