The Express opened the weekend on Friday night against UMASS Amherst Womens club team (ACHA) in Amherst, MA. The Express got off to a hot start with Catrina Chinetti weaving her way to the slot off of a face-off and scoring off a great shot over the goalie’s shoulder. UMASS was able to tie it up and in the waning seconds of the second period took the lead 2-1 into the intermission.

Determined, the Express came out ready for the third period and were able to tie the game up on a beautiful breakaway goal by Meghan Gambino. Gambino would then set up her line-mate Anya Nichipor on a two-on-one rush to take the lead. The Express extended the lead to 4-2, when Gambino found the top corner with a rebound goal.

With the Express able to kill off a late penalty, Nichipor buried an empty net goal to finish the game 5-2.

Julia Chase backstopped the team with some great, timely stops facing 43 shots in the win.

Back in action on Saturday, the Express hosted NAHA Red at Rodman Arena. In a game filled with penalties, the Express were able to come away with a 2-0 victory. After a scoreless first period, the Express broke the tie on a Caeli Reed power play slap shot that found its way five-hole and into the net. After killing off a couple of 5 on 3’s, Abby Fennell came out of the box and found herself on a breakaway. With a great move to the back hand and elevating her shot, Fennell gave the Express a two goal lead. The team continued to battle and kill off more penalties, including a 10 min misconduct penalty against Meghan Gambino. In net, Lilly Rodgers was unbeatable, earning the shutout with 26 saves.

This week the team returns to action on Friday facing off against Cushing Academy. Saturday they’ll travel to Essex Sports Center to play the North Suburban Wings U19 team. 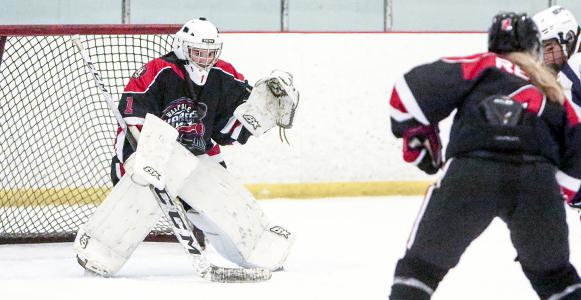