Express Junior's Combine To Win 3 of 4

Walpole, MA - The Walpole Express Junior EHL and EHL Premier teams were both in action twice this past week, combining for three wins in four games.

The EHL Express opened their season on Thursday against the Seacoast Spartans in Exeter, NH. The Express got off to a hot start with Jona Hildreth redirecting a Cal Mell point shot to beat the Spartans goalie less than a minute into the contest. Later in the period Patrick McDonald buried a rebound off of a blast from Casper Hallgren to put the Express up 2-0 heading into the break. The Express had another two goal period in the second with goals coming from Hunter Phillips and James Bellavoine. In the 3rd period the Express had three successful penalty kills including a 5 on 3 kill that was ultimately a 6 on 3 as the Spartans opted to pull their goalie for an extra attacker during the extended two man advantage. The game was capped off with Hildreth plotting his second goal of the game just over midway through the 3rd period. Tobias Falkenstedt was solid in net making 21 saves to earn both his first EHL win and shutout. The line of Hildreth, Phillips and Lopez were dynamic offensively with each player recording a multi point game in the 5-0 over the Spartans.

Saturday the EHL team traveled to Cape Cod and ran into a stout Seahawks team that was backstopped by Filip Schlyter in net. In a game that was 1-0 late into the 3rd period, the Express ultimately fell 3-0 including an empty netter. Falkenstedt was again solid in net for the Express recording 33 saves on 35 shots.

The Express EHLP team took on the Connecticut Chiefs in a weekend Home and Home series that saw the Express out score the Chiefs 9 to 1 on the weekend. Saturday, the Express got an outstanding performance from Garrison Shepard who recorded four goals in the 5-0 win. Cam Bennett and Owen Swanbon also had notable games, with Bennett ending the day with three assists and Swanbon recorded a shutout in his first EHLP start. Sunday brought a new venue with a similar result. The Express again were all over the Chiefs, winning 4-1 at Rodman Arena in the EHLP teams home opener. Shepard was hot again scoring twice on Sunday while Hogan Nelson picked up his first win of the year for the Express.

This week both teams return to action on Saturday at Rodman Arena hosting the Vermont Lumberjacks before the EHL team heads into the first EHL showcase of the season September 29th and 30th at Rodman Arena.

To keep up with all things Express be sure to follow us on twitter @ExpressJrMens and remember you can catch all of the EHL and EHLP games live on HockeyTV.com 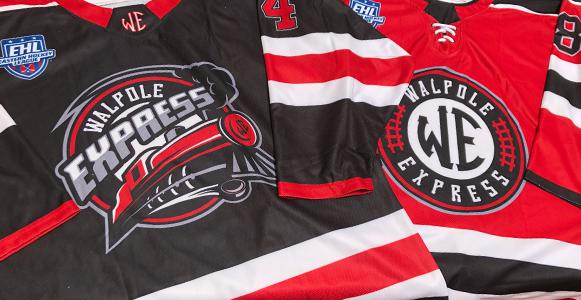