Walpole, MA - The Walpole Express are thrilled to announce that BC alumni Kate Leary has been named Head Coach of the Express Women's Junior team.

Coach Leary will step in for Coach Doherty who has helmed the team for the past three seasons.

"When Coach Danielle Doherty accepted her new teaching position we knew we wanted someone equally talented that could seamlessly take the reigns of the program," said Express Owner Rob Barletta. "We've found that with Coach Leary."

"When the opportunity came about for me to return to my Alma Mater at Lawrence Academy I knew I had to take it," said Doherty. "Having known Kate for the past few years, and both being BC Alumni, I knew she was the one to continue the success of the Express Women's program."

Coach Leary is looking forward to getting on the ice with the team, which begins it's season in September. “I’m very excited to be working with the Walpole Express," said Leary. "I think we will have a great team and I can’t wait to get the season started.”

Kate is a skilled forward from Seabrook, NH who played D1 hockey for the Boston College Eagles. She earned a bachelor’s degree in Applied Psychology/Human Development and History in May 2015.

After graduating from BC, Leary played for the Boston Blades of the CWHL leading the team in points in consecutive seasons 2016-17(24GP 16 pts), 2017-18 (28 GP 16 pts). She then played for Hockey Club Ladies Lugano of the Swiss Women’s A league in 2018-2019, capturing the league regular season and championship title while posting 61 points in 27 Games.

Prior to BC, Leary played four years for The Governor’s Academy, where she amassed 340 points (164 goals, 176 assists) in 100 games at the Governor's Academy in Byfield, Mass; twice scoring more than 40 goals, notching 40-plus assists and tallying over 90 points in a single season. She led Governor's Academy to four consecutive New England Preparatory School Athletic Council (NEPSAC) Championships from 2008-2011 and was named to the All-Independent School League (ISL) Team for sophomore, junior and senior seasons. Kate received an All-ISL Honorable Mention as a freshman and went on to be named an assistant captain for Governor's Academy as a senior. She was also a four-year letter-winner for Governor's in field hockey and lacrosse, being tabbed All-ISL (2009-10), as team MVP (2010) and a Boston Globe All-Star (2009) for field hockey. Earlier in her playing career she won three national championships – in 2006, 2008 and 2009– with Assabet Valley.

The Express Women's Junior team participates in numerous showcase event's throughout the USA and Canada during the season. Practices will soon begin at Rodman Arena in a few short weeks. 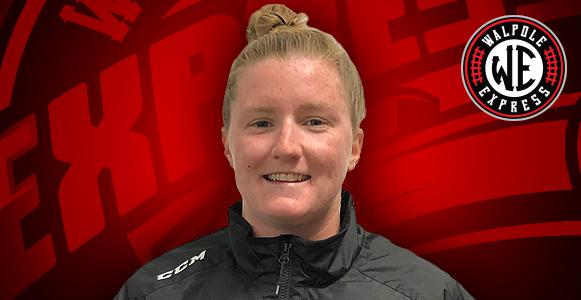