Walpole, MA - The Walpole Express, proud members of the Eastern Hockey League, are pleased to announce the hiring of Cody Campbell as the new Head Coach of the EHL team.

Team Owner Rob Barletta is confident in his ability to continue the Express traditions. "We have prided ourselves on being an organization that develops players and prepares them for the Tier I, Tier II and college levels," said Barletta.

Campbell echoed those thoughts, “I am excited and honored to have been given the opportunity to be the Head Coach of the Walpole Express," said Cody. "I would like to thank Mr. Barletta and Mr. Stirling for trusting me to continue and build upon the tradition of on ice success, character development, and player advancement that the Express have established."

Cody comes to the Express after several seasons as Associate Head Coach of the Odessa Jackalopes in the North American Hockey League. Prior to the Jackalopes, Campbell was the Assistant Coach with the Janesville Jets (NAHL), and the Cedar Rapids Roughriders (USHL). Cody’s main role in the NAHL and the USHL has been recruiting, as well as a major hand in college placements.

As a player, Campbell was a 3-year letter winner at Niagara University (D1), where he helped the 2012-2013 Purple Eagles to an at-large bid in the NCAA Tournament. Before kicking off his collegiate career, Cody skated for the Cedar Rapids Roughriders and Fargo Force of the USHL.

"I am confident in Cody's ability to recruit top level prospects and place them into top colleges. His experience coaching in the USHL and NAHL will be invaluable to our players," added Barletta.

Cody credits past influences for the opportunity.

"I would like to thank the Head Coaches I have worked under, especially Greg Gatto, for helping prepare me for this opportunity. My family and I are thrilled to be a part of the Walpole community and cannot wait to get started", said Campbell.

To join Coach Campbell, register for Tryouts by clicking here 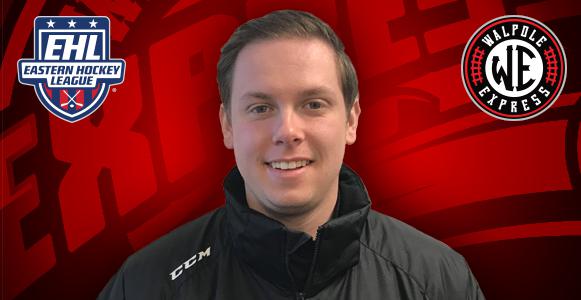